At least 38 people have died after a fire broke out at a building site near South Korea’s capital.

Officials are worried that people could be trapped inside the collapsed warehouse, which was under construction in Icheon, south of Seoul.

Hundreds of firefighters spent several hours putting out the blaze which was one of the worst in the country in recent years. 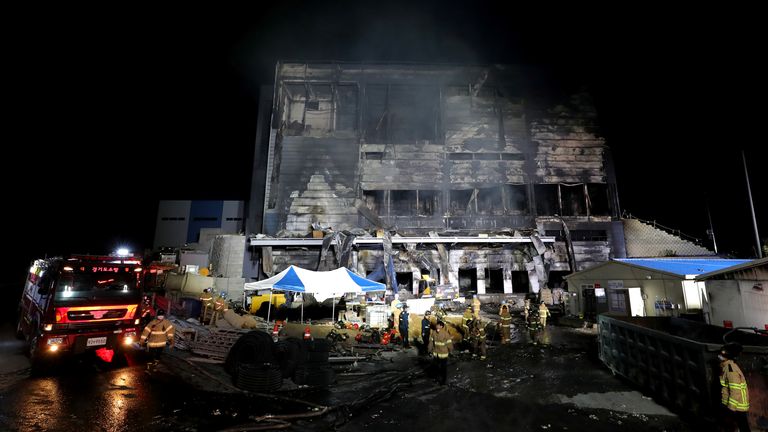 Eight members of staff at the site are being treated for serious injuries in hospital, while two more were slightly hurt and 30 others managed to escape.

At least one person remains unaccounted for.

The cause of Wednesday afternoon’s fire is unknown, but officials are investigating a potential explosion that was triggered while workers were working underground at the site.

“There was no clothing left (on the workers) at all,” said Seo Seung-hyun, head of the Icheon fire department.

“We presume that an ignition of oil mist caused an explosion and that the sudden combustion gave the workers no chance to escape.”

He added that the victims who died on the other floors probably inhaled toxic gas, and that more than 400 firefighters and rescue workers, along with 120 vehicles, were deployed to the scene. South Korea’s President Moon Jae-in has said officials should use “all available resources” in the search and rescue operation, while Prime Minister Chung Sye-kyun visited the site to oversee the efforts.

Despite being of the richest countries in Asia, South Korea has struggled to improve safety standards and shift attitudes that treat safety as less of a priority than economic progress.

In 2008, Icheon was the site of another big fire, when 40 people died at a warehouse, and 46 people died in 2018 when a blaze tore through a small hospital that had no sprinklers, in the southern city of Miryang.

Beirut explosion: Family grieves for paramedic as the search for bodies goes on