Experts are concerned that states across the South, where vaccination rates are lagging, could face a surge in coronavirus cases over the summer.

A dozen states — many of them in the Northeast, including Maine, Massachusetts and Connecticut — have already reached a benchmark of at least 70 percent of adults with at least one vaccine dose, a goal President Biden has set for the nation to make by July 4. But in the South, that marker is nowhere in sight for several states.

In 15 states — including Arkansas, the Carolinas, Georgia and Louisiana — about half of adults or fewer have received a dose, according to a New York Times analysis. In two states, Alabama and Mississippi, it would take about a year to get one dose to 70 percent of the population at the current pace of distribution.

Public-health experts and officials in states with lower vaccination rates say the president’s benchmark will help reduce cases and deaths but is somewhat arbitrary — even if 70 percent of adults are vaccinated, the virus and its more contagious variants can spread among those who are not.

But they remain concerned that their residents are more susceptible to infection as restrictions ease across the country, the sense of urgency to get vaccinated declines and many Americans in warmer climates avoid the heat by heading indoors, where the virus spreads more efficiently.

If there is a summer surge across the South, experts believe it won’t be as grave as last summer’s because at least some people are vaccinated and treatments have improved. But memories of last summer, when cases rose quickly after some Southern states rushed to reopen, are still fresh. Younger people, who are less likely to be vaccinated, will be the most vulnerable during any surge this summer, said Dr. Edward Trapido, an epidemiologist and associate dean for research at the Louisiana State University School of Public Health. While death or severe illness is not as common for young people with Covid-19, it’s still possible, he said.

“The surge is not likely to end up tying up hospitals, and causing lots of deaths,” Dr. Trapido said. “There are certain populations that are undervaccinated, and that’s where we will expect to see a rise.”

To avoid a summer surge, states across the South need to catch up to those in the Northeast which have already gotten at least one dose to 70 percent of their populations, according to Dr. Peter Hotez, a vaccine expert at Baylor College of Medicine.

“We’re just we’re not even close to that in the Southern states,” Dr. Hotez said. He said he foresees a new wave in the South because “we’re so underachieving in terms of vaccination.”

Mississippi, for example, has the country’s lowest vaccination rate, with 34 percent of the population having received at least one shot. Gov. Tate Reeves of Mississippi said on Sunday that despite the low vaccination numbers, case numbers indicated the risk of contracting Covid-19 in his state was low.

Another worry is testing. But Dr. Trapido said a decline in testing would make it difficult to contain outbreaks ahead of a potential summer surge.

Nationally, the number of daily tests reported is down significantly. On Thursday, about 316,000 tests were performed, far below the winter peak when more than two million tests were being administrated some days, according to data from the Centers for Disease Control and Prevention.

“We don’t have so many people rushing for testing because all the messaging is about vaccines,” Dr. Trapido said. “It’s important to remind people that if you’re concerned, it’s worth getting tested.”

Even statewide figures that appear promising can gloss over local problem areas, Dr. Joseph Kanter, the top health official in Louisiana, said in mid-May. In Louisiana, less than 20 percent of people in some parishes have received a first dose.

“We’ve got a significant percentage of Louisiana that has initiated, but it’s not herd immunity,” Dr. Kanter said, referring to the share of the total population that needs to acquire resistance to the virus to slow transmission. “It’s nowhere close to it.” 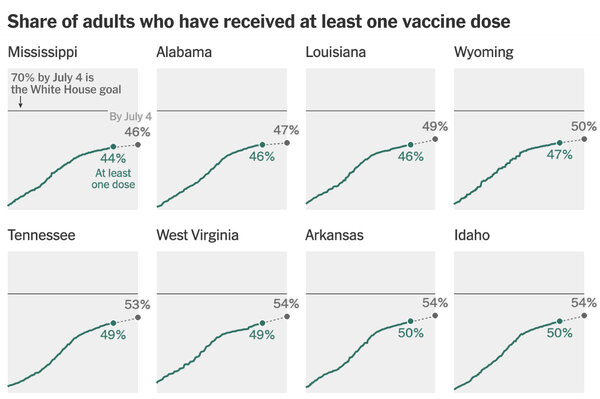 See Which States Are Falling Behind Biden’s Vaccination Goal

Even as the country is on track to reach the president's national target — at least 70 percent of adults with one dose by July 4 — 30 states probably will not.