Thunderstorms are forecast to hit the UK unleashing heavy downpours which could lease to flooding and disruption. But as large swathes of Britain are covered by severe weather warnings issued by the Met Office this week, how can you tell how far away a thunderstorm really is?

The Met Office has issued three severe weather warnings for the UK this week.

The first is for thunderstorms is in effect from 12pm to 11.59pm on Wednesday with up to 2.4 inches of rainfall expected in some areas.

The warning reads: “Slow-moving heavy showers and thunderstorms will break out across many parts of the UK again on Wednesday afternoon.

“Some places will miss them, but where they do occur they will bring torrential downpours with 25 to 35 mm rain falling in an hour and perhaps 50 to 60 mm in 2 to 3 hours in one or two places.

“Lightning and hail will be additional hazards.

“These showers and thunderstorms will only slowly die out through the evening.” 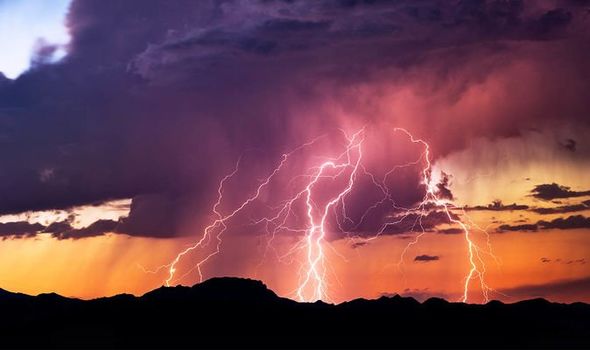 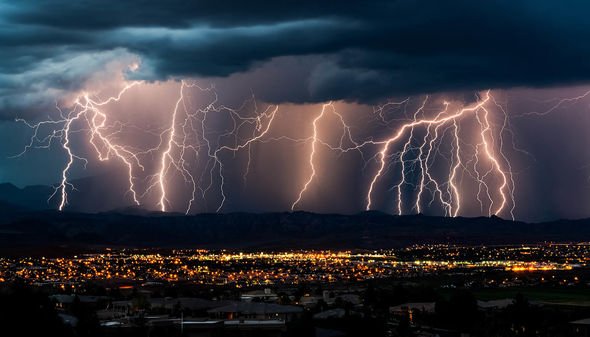 There is a second warning for thunderstorms in effect across southern England and Wales.

The warning advises that slow-moving heavy showers and thunderstorms may lead to disruption due to flooding. 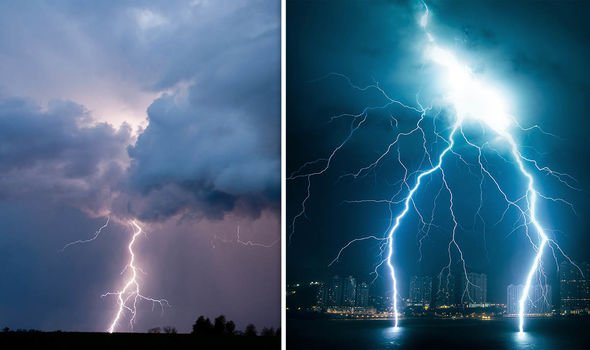 The final warning is for rain and is effect across central England, London and much of Wales.

The heavy rain may lead to some localised disruption with flooding of a few homes likely and some interruption to power supplies possible.

The warning reads: “An area of rain is expected to move westwards overnight giving some locally heavy rain during Thursday morning, before gradually clearing northwards.

“Many places will see 5mm to 10mm during this period, with a few places perhaps seeing 30mm to 40mm in three to six hours which may lead to some localised disruption.”

How to tell how far away a thunderstorm is

Thunder can always be heard after lightning stikes because light travels significantly faster than sound.

Lightning is the discharge of electricity which travels between clouds or to the ground.

Whereas thunder is the rapid expansion of the air in response to the lightning’s intense heat. 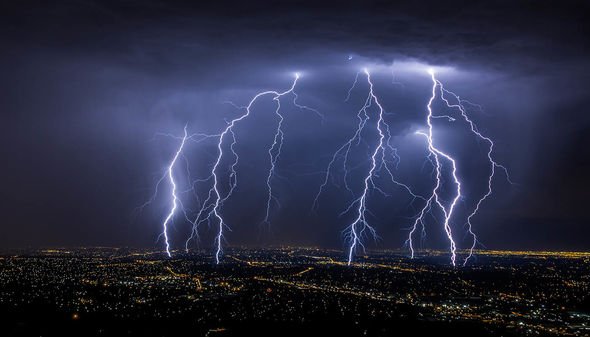 Both the lightning and thunderclap are generated simultaneously but with the speed of light at 299,792,458 m/s and the speed of sound at 340.29 m/s, there will always be a gap between the two to the observer.

At times lightning may be seen, but no thunder is heard.

This may be because the storm is more than 12 miles away (20km) away or because the atmospheric conditions lead to sound bending upwards and away from the surface.

There is a simple method for calculating your distance from a lightning strike.

You simply need to count the number of seconds which pass between a flash of lightning and the crack of thunder which follows it.

Then you divide that number by five.

The resulting number will tell you how many miles you are away from where the lighting has just struck.

For example, a five-second gap indicates the lightning struck one mile away.

If you wish to find out how far the storm is in kilometres, you simply need to divide the number of seconds by three.