Syrian media says no one hurt in the Turkish attack over Idlib with pilots parachuting to safety.

In a Twitter post on Sunday, Turkey’s defence ministry said its forces struck two SU-24 aircraft in response to the downing of the drone.

Syria’s SANA news agency confirmed the aircraft were hit over northwestern Idlib province, but said no one was hurt in the attack. The pilots used parachutes and landed safely, it added.

The Syrian military’s Al-Nayrab airport, on the outskirts of Aleppo city, was hit by air attacks “making it out of service”, Turkey’s state-run Anadolu news agency cited “local sources” as saying.

Syrian forces used the airbase for “attacks against the Turkish armed forces and civilians in Idlib”, the news report said.

“The regime’s range of action has been further restricted as the Al-Nayrab military airport has been made unusable,” sources were quoted as saying.

Al Jazeera was unable to independently confirm the report.

Amid the escalating tensions, the Syrian government closed the airspace over Idlib, with one official telling SANA any aircraft “that violates our airspace will be treated as a hostile flight that must be shot down and prevented from achieving its objectives”.

Forces loyal to al-Assad, backed by Russian airpower, have renewed an offensive to capture Idlib from opposition forces, who are backed by Turkey.

Since the operation intensified in December, Syrian government forces have rapidly advanced into the last opposition stronghold, retaking the strategic M5 highway and solidifying control over parts of Aleppo province, which borders Idlib.

Turkey says the operation violates deals signed with Russia in 2017 and 2018 to set up de-escalation zones in the region.

Tensions have escalated in recent days after 34 Turkish troops were killed in Syrian government air raids on Idlib on February 27. The toll was the biggest military loss the Turkish military has suffered since it intervened in the Syrian conflict in 2016.

“Following the heinous attack on February 27 in Idlib, operation Spring Shield successfully continues,” Akar said in a video shared by the defence ministry.

Damascus is yet to comment on the Turkish claims.

“We have no intention of clashing with Russia. Our aim is to stop massacres Syrian regime’s massacres, radicalisation and migration,” Akar was quoted as saying by Turkish media.

He went on to pledge retaliation against attacks on Turkish forces and its observation posts in Idlib and said: “Turkey will only target Syrian regime soldiers and elements in Idlib who attacked Turkish troops … Turkey expects Russia to use its influence to end to Syrian regime attacks.”

The renewed hostilities in Idlib has displaced nearly one million people, mostly women and children, according to the United Nations. About 300 civilians have also been confirmed killed.

Syrian civil defence rescuers told Al Jazeera that four civilians were killed, including a child, in an air attack on Sunday by government forces near the town of Maaret Masreen in Idlib.

Mark Lowcock, head of UN’s humanitarian agency, has described the situation as the “biggest humanitarian horror story of the 21st century” and called for an immediate ceasefire.

At a pro-Turkish demonstration in Idlib’s Hazzaneh town, Hussein al-Hamad said Ankara intervened in Idlib “based on the request of the free Syrian people”.

“We are in full support of the Turkey’s armed forces’ operation in Idlib and God willing we will liberate all the towns in the province,” al-Hamad told Al Jazeera.

“Turkey’s strong intervention confirms the continuation of battles to wrest control of the fallen areas from the Syrian regime forces and its Russian allies and Iranian militias.”

“We are all hopeful that something positive will happen to relieve the Syrian people of their suffering … We need an ally like Turkey to actively push back the Syrian government force,” Fadi told Al Jazeera.

“The morale was low when we learned of the regime’s advancement into Idlib, but with the rebels taking back control of Saraqeb, our faith in the opposition groups has resurged, especially with their positions in Jabal Zawiya and Sahl-al-Ghab. We hope in another month’s time Idlib will be under full control of the rebels.” 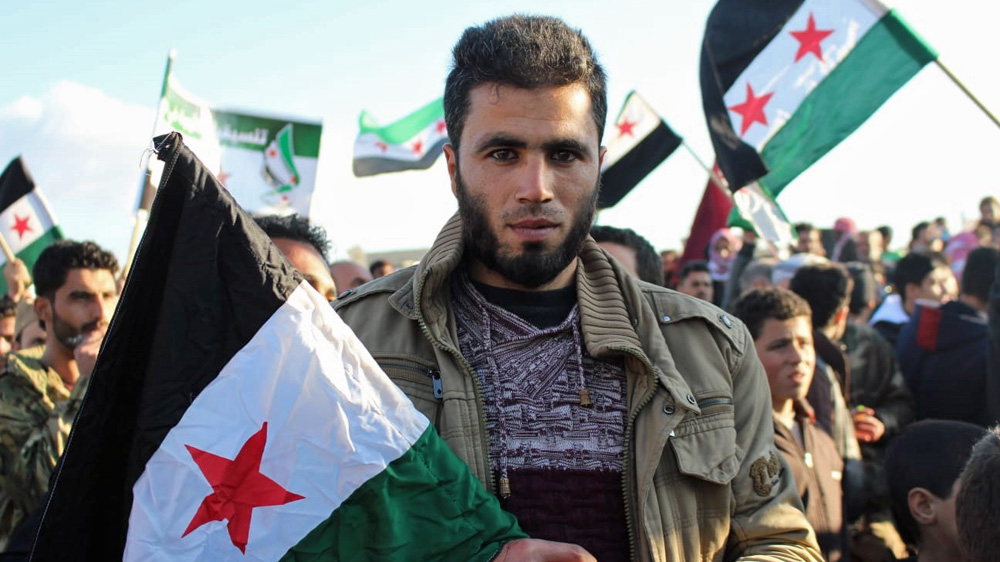