May is on track to be one of the wettest in modern UK history, with Wales reporting 129 percent of its average rainfall for the month by May 21. There are signs this could change going into next month, with The Weather Outlook predicting a sharp rise in temperatures.

Analysts by the weather monitoring service say Britain could see a “blowtorch into the south by June 4” though they admit this result is just one model.

Writing on Twitter, Brian Gaze said: “Here we go yet again? ECM00z has the blowtorch into the south by June 4th. However, it was a warm outlier in the ensemble.”

Asked what temperatures the country could expect if this model came true, Mr Gaze told one online user saying: “I think 30C would be in danger during the first week of the meteorological summer if it came off.

“Would be extraordinary given the cooler May.” 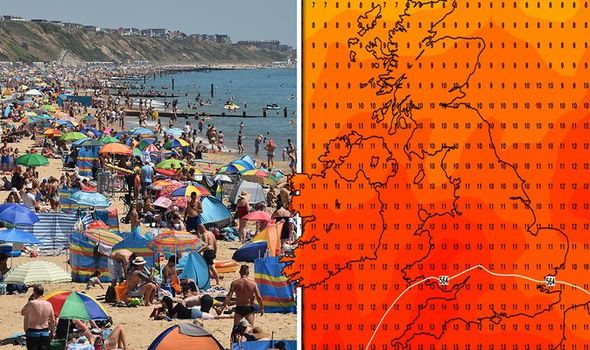 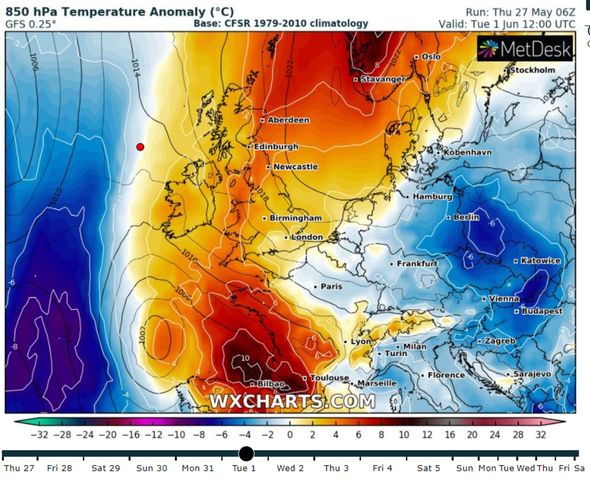 Mr Gaze was commenting on charts which turned the country red as the warmer conditions moved in.

The meteorological summer runs from June 1 to August 31 each year.

For its forecasts, The Weather Outlook uses data from the European Centre for Medium-Range Weather Forecasts.

BBC Weather has also noted the possibility of warmer weather but suggested “cooler, unsettled weather” is more likely for the beginning of next month. 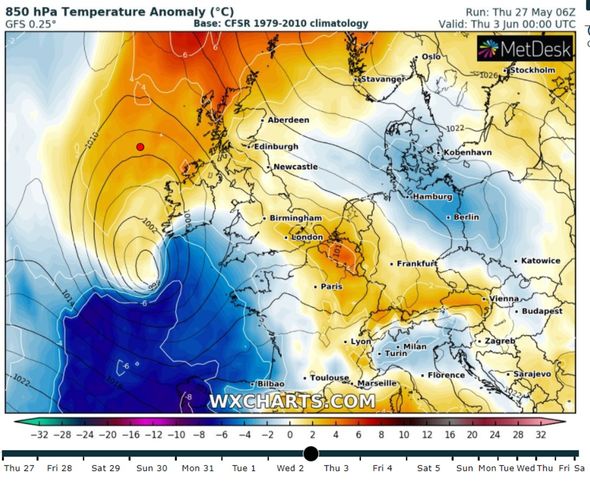 According to the broadcaster, there is a “roughly 30 percent” chance of “drier, warmer” conditions that could be brought in by sub-tropical African or Atlantic air.

This would require the wind to blow from a southerly or southwesterly direction.

BBC Weather notes: “The main alternate scenario for early June is that high pressure from the bank holiday weekend builds strongly into Scandinavia instead of shifting into Russia.

“This is a mostly drier pattern, but with high pressure to the east the winds would instead shift to southerly and allow us to tap into warmer African and Mediterranean air. 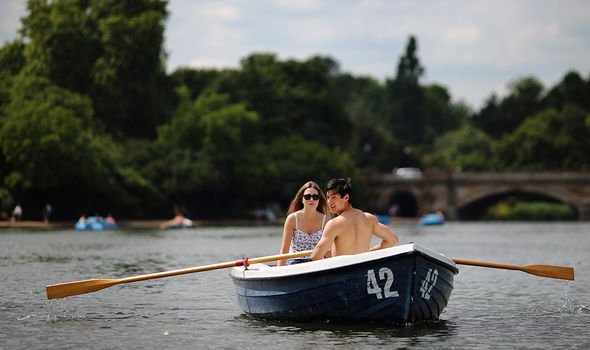 “This is potentially a very warm pattern and there is a chance for thunderstorms to drift in from the south.”

However the BBC notes there are “stronger signals” for the current inclement weather to continue.

A cold front could blow in from Iceland bringing unusually cold conditions for the start of June.

The BBC said: “This will bring a lot of cooler, unsettled weather for the UK.

“The rain will most often take the form of scattered afternoon heavy or thundery showers with sunny spells, rather than stormier weather with bands of rain.

“With low pressure north or east of us and high pressure to the southwest, the large-scale weather pattern helps promote northerly or north-westerly winds through the week.

“This will keep the temperatures below average, bringing in air from Iceland and the North Atlantic.”

For the remainder of the month, between June 7 and 20, the BBC predicts more unsettled weather. 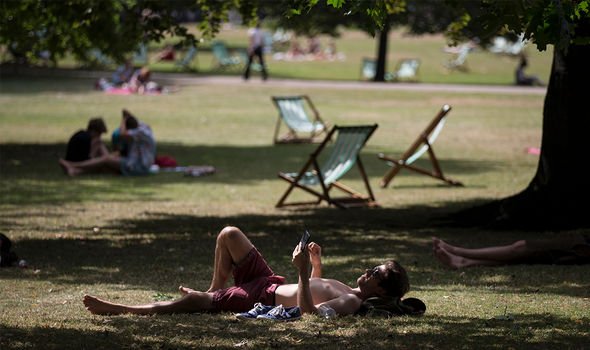 This is likely to see Britain experience sunny spells as well as cloudy and rainy periods.

The BBC notes: “There are no clear signals for either to be dominant for the entire month.

“Instead, we expect broad low pressure from Scandinavia to bring unsettled, cool weather that will occasionally be broken up by high pressure building in from the southwest.

“When low pressure is in control, there will be a greater chance for some unseasonably windy days from Atlantic weather fronts.

“There will also be plenty of sunshine and shower days as well.”
Source: Read Full Article

How Kyle Larson Answered the Haters with a NASCAR Cup Championship

This High-Powered HIIT Workout Will Crush Your Upper Body