Britons across the north of the country are likely to experience rain and showers in the coming days, but conditions in the south will remain mostly dry. Maps from WXCharts show the UK will scorch in a five-day period of hot weather, where the mercury could reach 32C in parts. But forecasters are also predicting thundery showers to hit areas in the UK through next week ahead of the country experiencing changing weather as a result of ex-hurricane Paulette which will pass close to Britain.

Northern parts of Britain are likely to be smashed with 60mph winds this weekend ahead of a mini-heatwave through next week.

The strong wind gusts and wet conditions will impact northern parts of the UK according to the Met Office.

Significant rainfall is anticipated in parts of Scotland prompting the Met Office to issue two yellow weather warnings for rain on Saturday and Sunday.

The warnings advise that up to 6.3 inches (160mm) could fall in some areas.

The downpours will come to an abrupt end over some regions as a bulge in the jet stream allows some very warm air to move northwards across the UK.

Some central and southeastern areas could become very hot early next week. 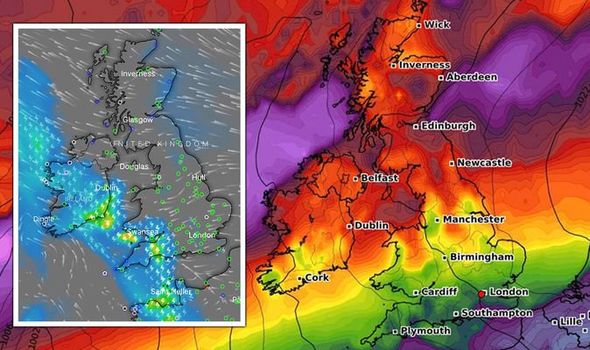 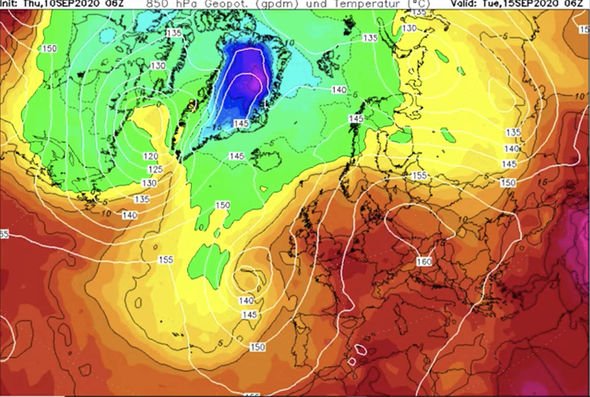 The mercury is forecast to hit 30C and above on Monday and Tuesday as warm air moves across the UK from Europe.

Ahead of this mini-heatwave, Sunday temperatures could surge to hit 25C in some places.

Gavsweathervids forecaster Gavin Partridge said: “Low pressure up north and high pressure to our south is forecast for Sunday bringing a westerly to southwesterly front across the country.

“So for England and Wales it will be mainly dry and increasingly warm, but Scotland and Northern Ireland it could well be a little bit more unsettled.

“On Monday through to Tuesday, the southerly wind will come up pushing up with the UK Met Office.

“The low pressure is down to our south-west which may trigger some thunderstorms on Tuesday in the southwest, but the main thing through the early part of next week is the push-up in the temperature.” 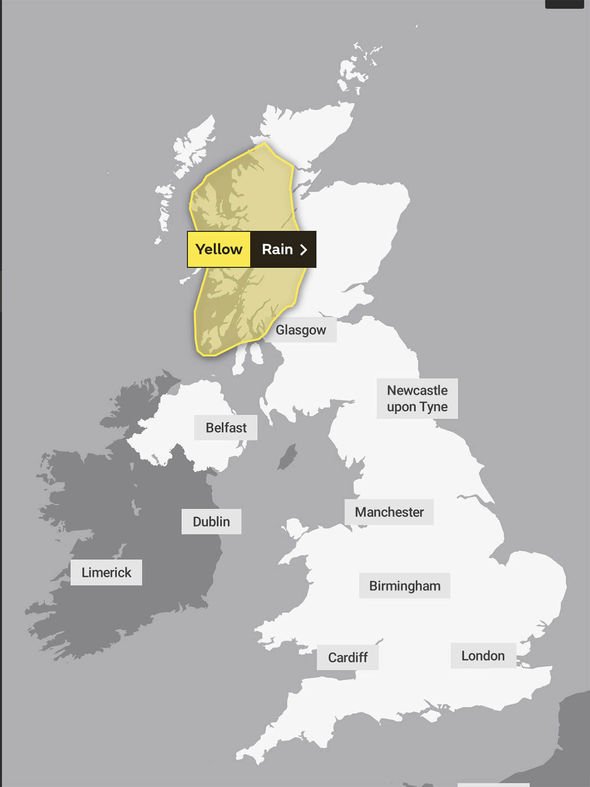 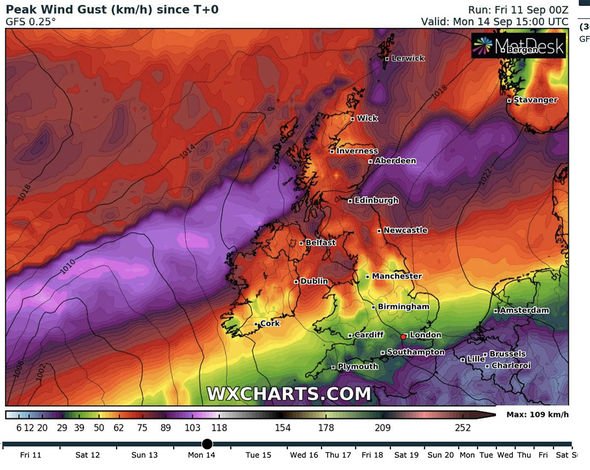 The forecaster added there will be a risk of thunderstorms breaking out on Wednesday.

He said: “By Wednesday it will all become rather slack and we could be starting to see an increased risk of thunderstorms breaking out and it will still be very warm to hot down in the south.

“GFS shows that again high pressure in the south and low pressure to the north on Sunday will be increasingly warm and dry which will carry on and in fact intensifies through the early part of next week.

“Winds will probably be pushing up from the southeast of the upper air temperatures for Monday the UK bathed in very warm air on Monday, but it turns even hotter as we go through into Tuesday.

“The high pressure is drifting over towards central and eastern parts of Europe and low pressure is out to our west which means we are pulling up those very warm to hot southerly winds.”

Temperatures could soar to hit 30C and above from Tuesday according to gavsweathervids.com.

Mr Partridge said: “Looking at the other air temperatures across England and Wales we are the 15C ice firm temperatures which is really hot and which could lift temperatures to around 30C/31C, potentially even 32C down in the southeast – I wouldn’t rule it out that it would be 90F somewhere like London on Tuesday.

“But with an increasing risk of thundery showers breaking out and that sort of continues and develops through the middle and second half of next week as the high pressure begins to stick towards the northeast.

“Low pressure tucks in from the south and from the west going against this high pressure that turns up increasingly unsettled and potentially thundery.

“So through the end of next week, the UK will have had a proper thundery breakdown.” 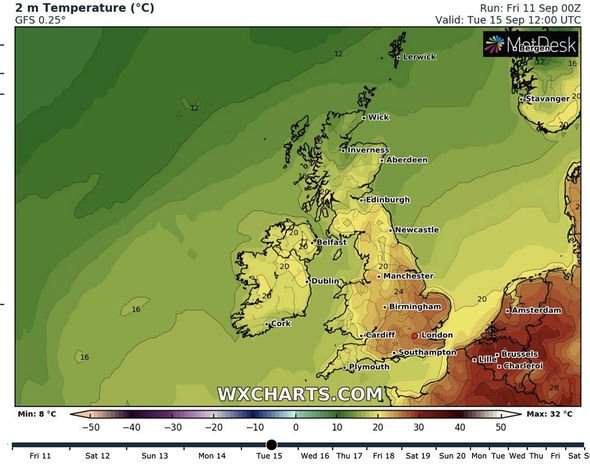 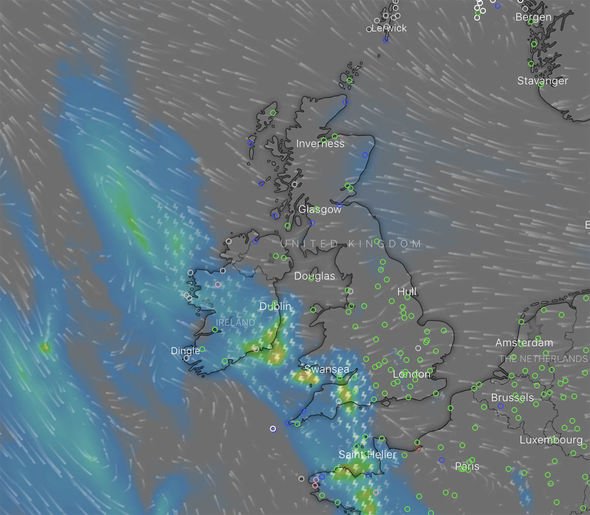 Weather maps from WXCharts show Britain will see sunnier skies from Sunday through to Thursday – meaning five days of glorious heat for some.

The hot weather will kick off with highs of about 22C on Sunday for much of the east coast, reaching across central England and parts of the midlands.

Into Monday, and that heat will ratchet up to 26C around London and southern England before rising further to 27C on Tuesday evening.

Wednesday and Thursday will see the temperatures dip but Britain will still enjoy highs of 24C both days.

At the end of next week, temperatures are forecast to drop off by a significant amount – but the UK is then likely to see the effects of a passing ex-hurricane.

Mr Partridge said: “By Friday, September 18, a trough of low pressure will hit meaning there will be showers of longer rain and probably thunder initially and temperatures will cool down a lot.

“The remains of Hurricane Paulette will also move into the north Atlantics on Friday as a very very intense ex-hurricane, off Newfoundland.

“As we move towards 10 days from now, Paulette will begin to dive southwards into the central part of the North Atlantic and that starts to inflate a ridge close to the UK again, so we don’t get a direct hit from Paulette but it will have an impact on our weather.

“The effect of Paulette will be that it actually starts to inflate a ridge again around the UK so by Friday we are back to high pressure as we go through the third week of September which is a direct result of what Paulette is doing.

“We finish up with high pressure drifting over to the east and we are back up to those warm southerly winds once again.”

Bank of America profit more than halves on pandemic woes