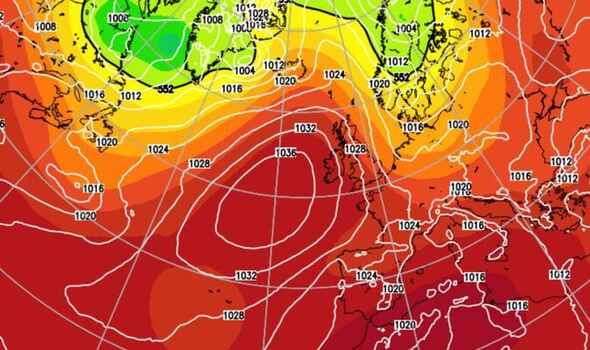 A band of rain will sweep the country over the next 48 hours as temperatures hover widely at 17C or 18C. However, a tropical blast from the Atlantic Azores islands is about to bring summer back in a blaze of glory.

Temperatures will rocket to 30C in parts of the country from the middle of next week with some isolated spots pushing even higher.

James Madden, forecaster for Exacta Weather, said: “High pressure will start to rise through the middle of next week as temperatures rise into the mid-20Cs.

“However, later in the week and beyond there is the potential to see 30C or higher in southern parts of the country.

“The overall theme now is for a period of exceptionally summery and very warm weather perhaps for a sustained period.”

With temperatures threatening to nudge 30C through the run up to mid-month, Britain could be facing a ‘major heatwave’.

“There is the possibility of Britain experiencing a major heatwave over the next fortnight.” 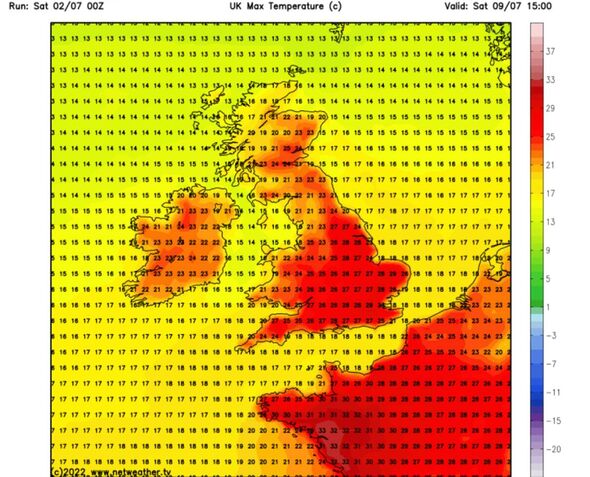 Hot weather will be driven by a huge region of high pressure stretching into Britain from the Atlantic Azores islands.

The ‘Azores High’ will start to build later this weekend and into the start of next week when temperatures will start heading upwards.

Swathes of the country will reach the mid- to high-20Cs ahead of the weekend before thermostat crank up even further.

Jim Dale, meteorologist for British Weather Services, said: “High pressure starts to build from the Azores at the start of next week and as we get to the following weekend, temperatures should be pushing towards the high 20Cs.

“We could see 30C by next weekend, and for many, it is going to be a very pleasant spell of warm, dry summer weather.

“Southern regions are likely to see the highest temperatures with Scotland, being closer to the jet stream, more likely to be cooler.” 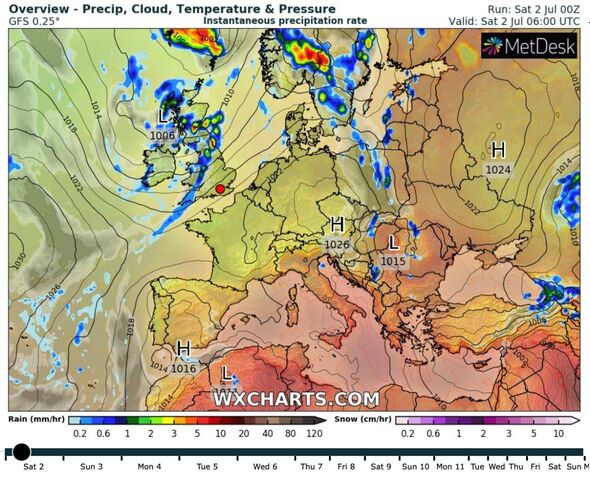 The hot weather will follow a weekend of showers which could be heavy in places today, he said.

He added: “Saturday, however, should bring the last of the rain before things start to dry up as high pressure moves towards the UK on Sunday and into the start of next week.”

Scotland and northern Britain are braced for the heaviest showers through the next couple of days, according to the Met Office.

Southern and south-eastern Britain will dodge the worst of any downpours with temperatures here likely to hit the mid-20Cs this weekend.

Met Office meteorologist Alex Deakin said: “There will be a band of rain coming in on Friday night with some lively and gusty winds.

“The rain will be pretty heavy at times before spreading across Scotland, and then a line of rain works from west to east across England and Wales.

“If you have plans on Saturday, keep up with the forecasts.”

Britons will have to hold out a few more days for the heat with predictions for ‘disappointing’ weekend temperatures.

However, rain will die out tomorrow as high pressure signals the start of summers blazing return.

Mr Deakin said: “Temperatures will be disappointing for the time of year on Saturday with 17C or 18C for most of us.

“On Sunday, high pressure gets a little closer, but there will be more showers particularly across northern and western areas.

“But it does look as though things will turn a little drier as that high moves in across the south and south west next week.”

Scores of children killed in Philippines' war on drugs: report

Temasek launches three-tranche offering of 10, 20 and 40-year US dollar bonds