The Met Office has forecast a chilly morning filled with downpours for people who are still making their way to work despite the latest government warnings to only travel if essential due to the coronavirus pandemic gripping the nation. It comes as snow charts from WX Charts have shown at least two inches will snow in eastern parts of Scotland on Tuesday. Temperatures will also plummet to zero in the same region, while wind chill reaches a freezing -4C.

The Met Office said on its website: “The far north will be chilly, bright but showery, while heavier rain returns to much of Scotland and Northern Ireland.

“Tonight there is rain sinking southwards, allowing colder, showery weather across the north: some heavy showers, wintry on hills.

“The south and east of England staying mainly dry and mild.” 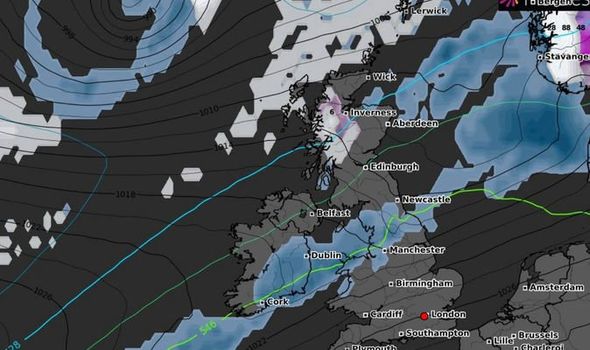 The forecaster added that the week will brighten up further down the line.

But first there is more wet and snowy weather.

The Met Office said: “Wednesday will be showery across Scotland and Northern Ireland, with some heavy showers, hill snow and possible hail and thunder.

“Rain and drizzle slowly edging southwards but the far southeast bright and mild. 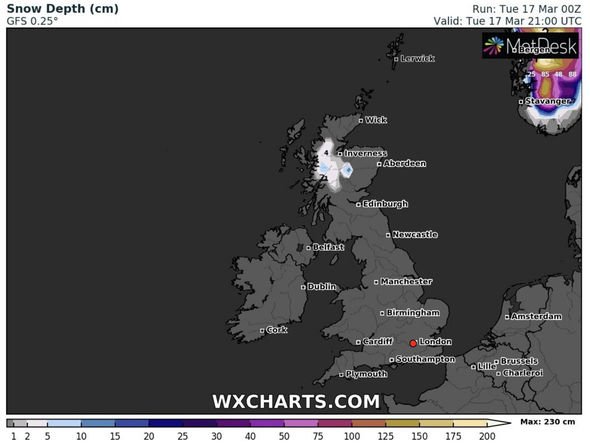 “Thursday to Saturday will see sunny spells and wintry showers in the north Thursday; cloudy in the far south.

“Fine and dry elsewhere, these conditions spreading to most areas by Saturday.”

At least eight flood warnings have also been issued by the Environment Agency as torrential rain continues to pour.

Some of the areas affected include Christchirch, Piddle Valley and Hay Moor. 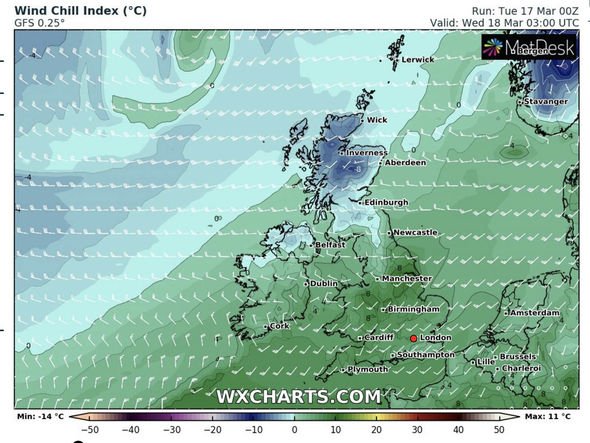 And forecaster Meteogroup also added that wintry weather will also cause disruptions throughout the week.

They said: “On Tuesday evening it will be cloudy with rain across Scotland, Northern Ireland and north-western parts of England and Wales. Snow is likely at times over Scottish hills.

“Dry with clear spells across southern and eastern England. Through the night rain will weaken as it shifts south-eastwards. Breezy

“Wednesday will be cloudy across England and Wales with patchy rain across Wales, central and southern England. 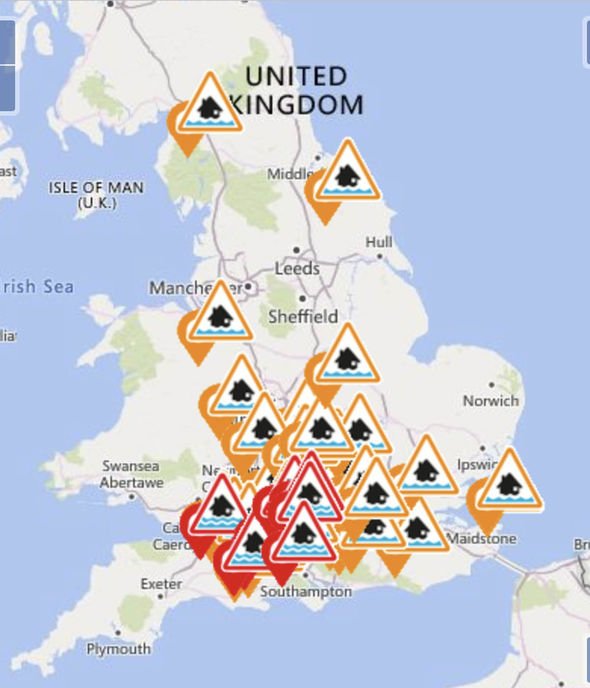 “A few heavy bursts of rain are possible in the morning across Wales and western England. it will be bright in Scotland and Northern Ireland with wintry showers in north-western parts. Breezy

“Thursday will be grey across England and Wales.

“The odd spot of rain is likely in the south and west. However it will be bright with a few showers in Scotland and Northern Ireland.

“On Friday there will be rain in southern parts of England and Wales but it will be chilly and mostly sunny elsewhere.”