A cold start to the weekend will culminate in a freezing Sunday, with some areas of the country experiencing temperatures below zero. Strong winds will reinforce the autumnal feeling with eastern England and parts of eastern Scotland experiencing some of the stronger blusters.

The Met Office’s meteorologist said: “It’s going to be another chilly day to end the weekend on Sunday but still some bright skies in the west.

“Cloudier in the east for this evening rain will gradually clear the southeast of England so it will leave a dry night for us all clearer skies in the west and north will allow temperatures to slide away tonight so a frost developing in Scotland and Northern Ireland.

“Temperatures in Northern Ireland could be as low as minus four and minus five in rural Scotland so a chilly start to the day on Sunday but bright skies across many northern and western areas.

“Later, the sunshine will turn a little bit hazy now in the east we still hang on to that cloud. 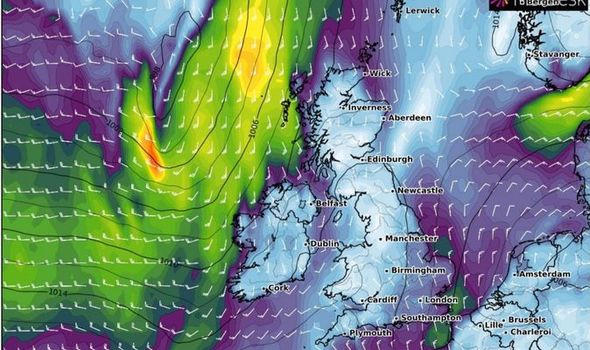 “So another cloudy day for eastern counties of England perhaps some rain just nudging in to East Anglia.

“In the afternoon through the evening time that cloud in the east lingers on.

“But a bright end to the day further west, and once again, a chilly night to come.”

Next week is looking less cold, thanks to a westerly flow. 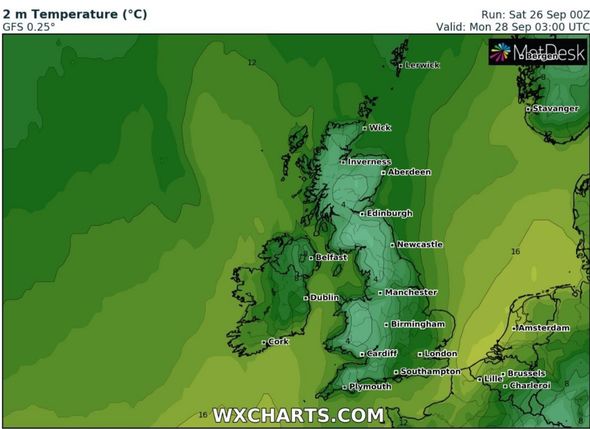 However, unsettled conditions will return with more wind and more rain.

“Looking ahead to next week it starts off a fairly quiet, some showering outbreaks of rain at times but we return to a westerly flow which means less cold temperatures towards the middle part of the week.

“A deeper area of low pressure will bring some wet and windy weather, so although it stays fairly quiet to start next week some more unsettled weather on the way.”

BBC meteorologist Sarah Keith-Lucas said: “There’s an area of low pressure that is quite slow moving and has been with us a couple of days now. 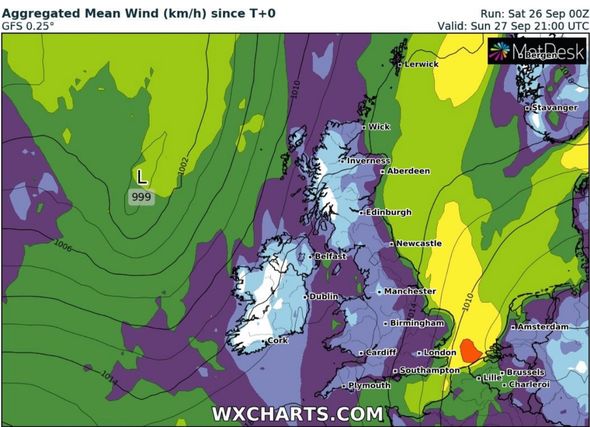 “It’s been bringing some showers and those brisk northerly winds.

“Windiest conditions will be across the east coast of England where it will be quite cloudy with some showers.

“But for the rest of the UK, there’ll be one or two showers for northern Scotland around this morning but a lot of dry weather.”

She added: “Some long spells of blue sky and sunshine will be on offer.

“It will be cloudier in the east and that cloud will just drift its way through the midlands into central southern England later on. 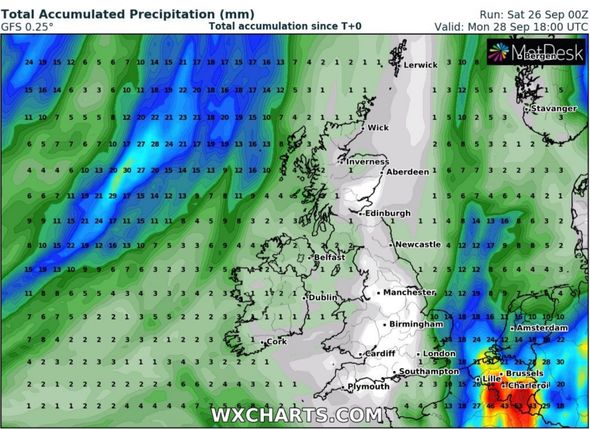 “Temperatures will be around about 12 to 15 degrees or so for most of us.

“They will be tempered by the strength wind, which will be about 20mph or so in the east.”

Ms Keith-Lucas said winds hitting the east coast from a northerly direction could reach 40 or 50mph.

She added: ”So that will drive some big waves on shore for parts of East Anglia for instance.

“Those showers in the east will fade away between this evening and overnight.”

Saint John to offer only essential services during COVID-19 outbreak