Ukraine’s forces have made large gains on the Kharkiv front in the country’s northeast in recent days, breaking through Russian defences in the area. Soldiers have been warmly received by civilians in liberated towns and villages as Ukrainian troops continue to advance amid fierce fighting.

Footage from the town of Balaklia shortly after Ukrainian soldiers entered shows a squad being received by relieved residents.

Sobbing, women emerge from a block of flats and hug each of the soldiers in turn.

A member of the Ukrainian Parliament, Inna Sovsun, shared the video on Twitter saying: “Residents of the liberated town hug Ukrainian soldiers who liberated their town from occupation.

“People invite the soldiers to their homes for pancakes!!! Although there is a humanitarian crisis in the town.” 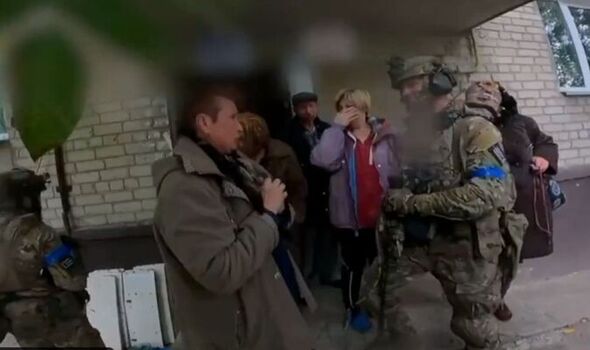 After keeping silent for a day, Moscow effectively acknowledged that a section of its frontline had crumbled southeast of Ukraine’s second largest city Kharkiv.

“The very fact of a breach of our defences is already a substantial victory for the Ukrainian armed forces,” the head of the Moscow-installed administration for occupied areas in Kharkiv province, Vitaly Ganchev, said on Russian state TV.

Ganchev later said his administration was trying to evacuate civilians from cities including Izium, Russia’s main stronghold and logistics base in the province near the front in the east.

The Russian defence ministry released video of military vehicles speeding along a highway, saying they showed reinforcements rushing to defend the area. The Kremlin declined to comment on the Ukrainian advance.