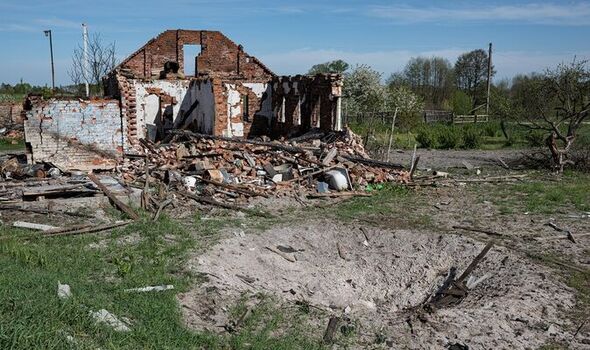 He said: “First I dropped by my grandparents to make sure they were all right, to bring them some groceries, and then I went straight to join up.” Because he had done his military service with the Ukrainian Border Guards in his late teens, Oleksandr headed off to enlist with a Border Guard unit. “But they were already full manned and turned me around right at the gate.”

He then went to the Territorial Defence, but because he already had military experience they told him to go to the army.

“I ended up being designated an artillery spotter for a D-30 [howitzer],” he said.

Oleksandr was sent to the front on the same morning that he signed up.

His unit was ordered to the northern Zhytomyr Region in anticipation of an assault from Belarus. When that didn’t happen, they received orders to go to Lviv for training, before being deployed to the fight in Kyiv.

The delay in deployment ended up saving his life.

He explained: “We left for Lviv by train, and as we were approaching the training ground it was attacked by Russian missiles.”

It’s still unknown how many soldiers perished that day. Upon arrival, Oleksandr and his comrades were assigned to barracks beyond the blast area and underwent their training at Yavoriv.

In Kyiv they settled in at an old army base, not far from the front, waiting to be deployed. Oleksandr said: “The commander told us not to worry about the drones flying around, as they were ours. So we were pretty relaxed.”

But on the morning they began heading out to take up positions closer to the action, their column was hit by cluster munitions.

The column consisted of three batteries, each with about 60-70 men. Oleksandr’s battery was in the rear.The lead battery suffered the worst casualties – 30 wounded and six killed.

He said: “I jumped under a truck. You’re not supposed to do that because the truck could explode but I was lucky and fared better than the guys out in the open.”

When the explosions stopped, the scene was devastating.

“Some of the men got up and fled before another missile could strike. Others ran over to assist the wounded.”

Oleksandr suffered shrapnel wounds to his legs and found himself soaked with petrol that had leaked from the ruptured tank of the truck.

A Unit of Territorial Defence arrived within minutes and he was evacuated in a pick-up truck to a civilian hospital in Kyiv.

He is now in a military hospital and expects to be released later this month.

Then it’s back to the battlefield – only this time in the East.

He said: “Of course I’m going back. “The guys continue to fight and I will be with them.”