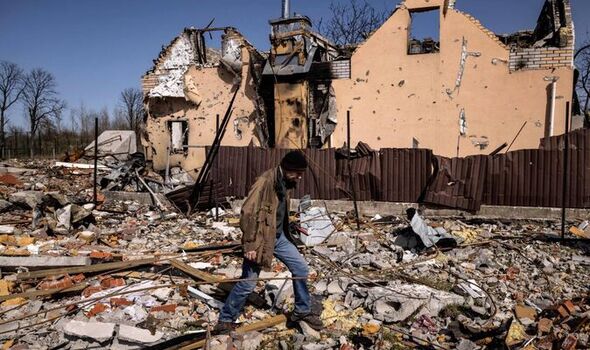 Only located 30 miles outside of Kyiv, Bohdanivka is a humble village that has recently been devastated by war. Russian forces occupied the area for just over three weeks in March, using it as a base as they prepared an eastern jolt towards the capital. But after the village was liberated by Ukrainian troops, its horrified residents are returning and attempting to piece back their lives.

After entering the village on March 8, Russian troops set up a military base in a local school while occupying houses and buildings around it.

Four soldiers decided to use Serghii’s house as their own, just across the road.

“When they entered, our family was hiding in the basement and they took us out and put us against the wall.

It was me, my wife, my son, my daughter and my daughter-in-law. They took our phones, and sim cards checked all of our messages and told us to go to the kitchen to live,” Sergii told the Daily Express.

The invading soldiers took control of Sergii’s home as a base while fighting continued in the area.

“They were doing whatever they wanted to do. Some of them were really cruel, they would enter the house with their AK47 whenever they wanted,” he added.

But with the fighting intensifying, Sergii and his family decided to get out when they could.

“The village was seized with tanks. When everything started, the fight for the village, there were a lot of tanks in between the houses which were all burning,” he described.

His family evacuated the village altogether, but Sergii sought shelter in a friend’s apartment a shorter distance away.

His house was mostly destroyed, but now he’s returned.

“I spent 20 years building this house, so I would do it [fix things] myself. I have no money for materials. When it comes to food, humanitarian help comes, and they have my name on the list for people who lost their house, so they just bring me food,” he added.

Irina Pryanishnikova, the head of the press office at the Kyiv regional police, told the Daily Express that over a dozen were killed during the conflict in Bohdanivka.

“It was liberated but people also told us about how quite cruel the Russian army was. Many tried to escape,” she said.

Bohdanivka had a population of fewer than 1,000 people in pre-war times.

According to Pryanishnikova, local authorities have found that only 10% of the village’s population remained despite Russian rule.

But during that time 16 dead bodies have been found, and investigations are underway for potential war crimes.

“Approximately 70% died from injuries from weapons, so they were tortured. And 30% were killed from the use of bombs,” Pryanishnikova added.

For resident Mila, she has just returned to her home in Bohdanivka. Carrying shopping bags from a local humanitarian centre, she is trying to mentally comprehend the devastation still.

“Yesterday we got back, and it looks crazy. The amount of destruction, the houses, everything is ruined. If you go inside of the houses everything has been looted, so I’m really depressed with how the state of the village is,” she told the Daily Express.

Days after the Russians invaded her village Mila was evacuated to a neighbouring town with her family. But she was on the move again as she discovered it was unsafe, and eventually fled to Kyiv.

“We were staying in the basement for two weeks, and one person came to us if you don’t leave now, you won’t have any chance. We had 10 minutes to get all of our stuff together, and we went. We were really lucky because the house we stayed in the night was bombed,” she added.

The scars in Bohdanivka clearly remain. Burnt-out tanks are seen in schoolyards and in the front gardens of houses.

Strangely, some buildings have been remarkably left intact, others completely destroyed, including a demolished Kindergarten.

The atmosphere is understandably subdued, but the noise of public buses and sporadic chatter outside houses show the village is attempting to return to some normality.

Oxana works at a local convenience store in Bohdanivka. She told the Daily Express about how she suspected Russian soldiers had plundered the shop during their occupation.

“There were empty shelves, broken windows, broken refrigerators, signs of the bullets, they were here doing anything they wanted,” she said.

The shop reopened 3 weeks ago and is only now starting to see more customers return.

“We can see more people coming in general, before Easter, so the village is getting back into a lively mood,” she added.

But for those living in the village, stress still lingers. One of the largely unscathed buildings is a local hospital.

According to Ludmila who works as an administrator there, Russian soldiers used it to treat their wounded.

Today, she says, the building is open for practice, but the village is still in a state of shock.

“After 2 pm, the doctors have to go house to house to [people in the village] to measure their blood pressure. [And] in general, people are asking for the antidepressants a lot,” she told the Daily Express.

It’s a Fateful Day in Georgia