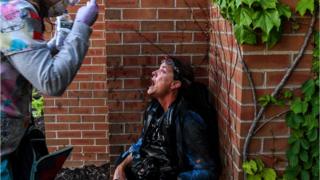 Dozens of journalists covering anti-racism protests that have rocked the US have reported being targeted by security forces using tear gas, rubber bullets and pepper spray.

In many cases, they said it was despite showing clear press credentials.

Such attacks “are an unacceptable attempt to intimidate [reporters]”, said the Committee to Protect Journalists, a New York-based group.

Attacks on journalists carried out by protesters have also been reported.

The arrest of a CNN news crew live on air on Friday in Minneapolis, where unarmed black man George Floyd died at the hands of police, drew global attention to how law enforcement authorities in the city were treating reporters covering protests that have descended into riots.

But over the weekend dozens of attacks on journalists and media crews across the country were reported on social media. In total the US Press Freedom Tracker, a non-profit project, says it is investigating more than 100 “press freedom violations” at protests in the last three days. About 90 cases involve attacks. 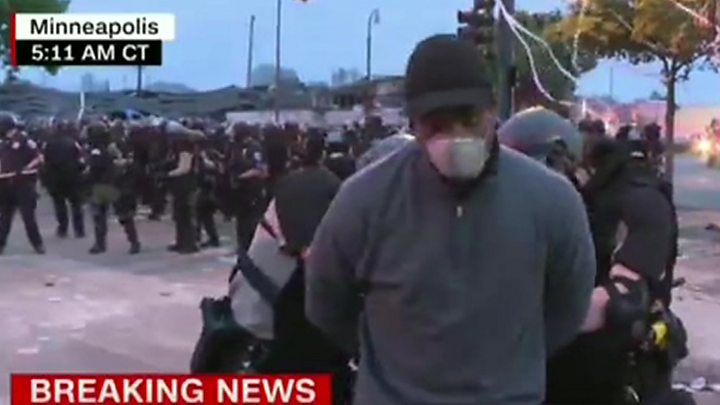 On Saturday night, two members of a TV crew from Reuters news agency were shot at with rubber bullets while police dispersed protesters in Minneapolis defying an 20:00 curfew.

“A police officer that I’m filming turns around points his rubber-bullet rifle straight at me,” cameraman Julio-Cesar Chavez said. Reuters said the Minneapolis Police Department had not commented despite being provided with video footage.

In Washington DC, near the White House, a riot police officer charged his shield at a BBC cameraman on Sunday evening.

The cameraman was “clearly identifiable as a member of the media”, said the BBC’s Americas bureau chief Paul Danahar. “The team had been following all directions from the police as they covered the protests in front of the White House. The assault took place even before the curfew had been imposed and happened without warning or provocation”. 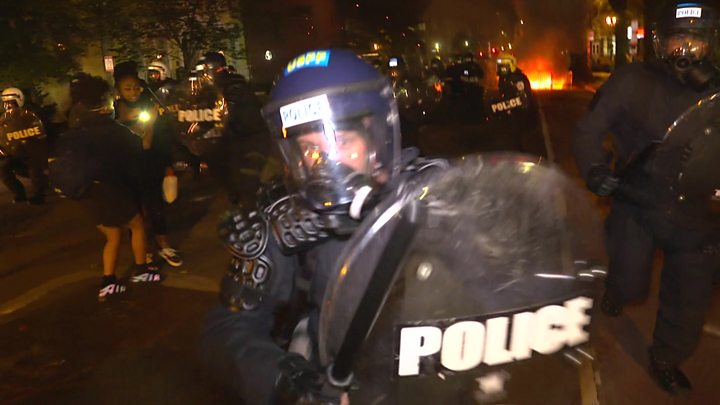 On the same day, on the other side of the country in Long Beach, California, radio reporter Adolfo Guzman-Lopez said he had been shot in the throat with a rubber bullet by a police officer. The BBC has contacted the Long Beach Police Department for comment.

I just got hit by a rubber bullet near the bottom of my throat. I had just interviewed a man with my phone at 3rd and Pine and a police officer aimed and shot me in the throat, I saw the bullet bounce onto the street @LAist @kpcc OK, that’s one way to stop me, for a while pic.twitter.com/9C2u5KmscG

Overnight on Friday, a Fox News crew were chased and hit by a mob of masked protesters near the White House. “It’s the most scared I’ve been since being caught in a mob that turned on us in Tahrir Square [in the Egyptian capital Cairo],” veteran Fox correspondent Leland Vittert said.

To put some perspective on the unprecedented nature of the weekend's attacks on journalists:

At @USPressTracker, we've documented 100-150 press freedom violations in the US per year, for the last 3 years.

We are currently investigating *over 100* FROM JUST THE LAST 3 DAYS.

On Saturday, Vice News journalist Michael Anthony Adams said he was pepper-sprayed in the face at a petrol station by Minneapolis police despite holding his press card in the air and yelling “Press!”

Video posted by another Vice journalist supports his account of what happened.

The moment Minneapolis police and state troopers stormed the Stop-N-Shop and trained their weapons on property owners and #journalists, pepper spraying @vicenews correspondent @MichaelAdams317 while he’s lying on the ground, Press ID above his head. pic.twitter.com/ZBcrASSn9U

On Friday night, Linda Tirado, a freelance photojournalist and activist, was struck in her left eye by a projectile that appeared to come from the direction of police in Minneapolis. She has been permanently blinded in that eye. 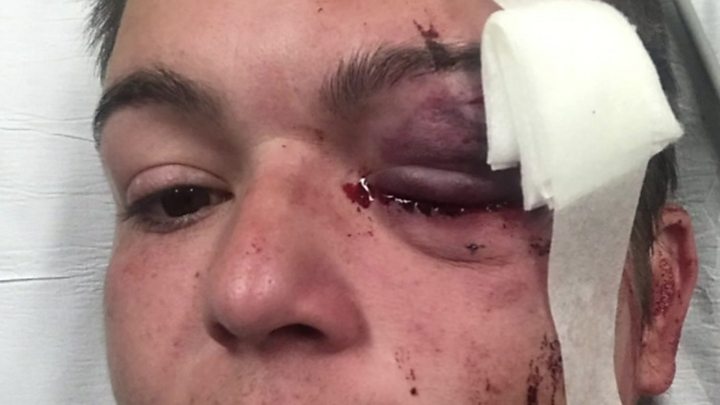 That same night a reporter from local news station Wave 3 in Louisville, Kentucky was hit by pepper balls fired by a police officer aiming directly at her as she reported live on television. “I’m getting shot! I’m getting shot!” she said.

A spokeswoman for the Louisville police said on Saturday that they were trying to identify which officer was involved. “Targeting the media is not our intention,” the spokeswoman said.

A reporter from Germany’s international news broadcaster Deutsche Welle was also shot with projectiles by police in Minneapolis this weekend while preparing to go live on air. He was wearing a vest emblazoned with the word “PRESS” and was also threatened with arrest, a video showed.

“Those policemen are under a lot of stress doing their job but of course they should have let us work and do our job,” Stefan Simons said.

A DW reporter and his camera operator have been shot at with projectiles by Minneapolis police and threatened with arrest while covering the protests sparked by the death of George Floyd. pic.twitter.com/SFKMv5SFW6

On Sunday, Minnesota’s governor apologised to those who had been detained in his state.

“I want to once again extend my deepest apologies, to the journalists who were once again in the middle of this situation who were inadvertently, but nevertheless, detained – to them personally and to the news organisations and to journalists everywhere,” Tim Walz said.

The incidents come as President Donald Trump continues to attack the media. On Sunday he tweeted: “The Lamestream Media is doing everything within their power to foment hatred and anarchy.” He said journalists were “truly bad people with a sick agenda”.

“The numerous, targeted attacks that journalists reporting on protests across the country have faced from law enforcement over the last two nights are both reprehensible and clear violations of the First Amendment,” the Reporters Committee for Freedom of the Press said.

Courtney Radsch, advocacy director at the Committee to Protect Journalists, told the BBC that the group was calling on authorities to “instruct police to cease targeting journalists and ensure that they are able to do their jobs safely and without fear of injury”.

A key pandemic unemployment program is set to expire, even as 11 million Americans rely on it

Nike Returns to Growth Amid Pandemic