Ahlam Aref Ahmad Al-Tamimi is on the FBI’s most-wanted list for her role in the 2001 bombing of a Jerusalem pizzeria. 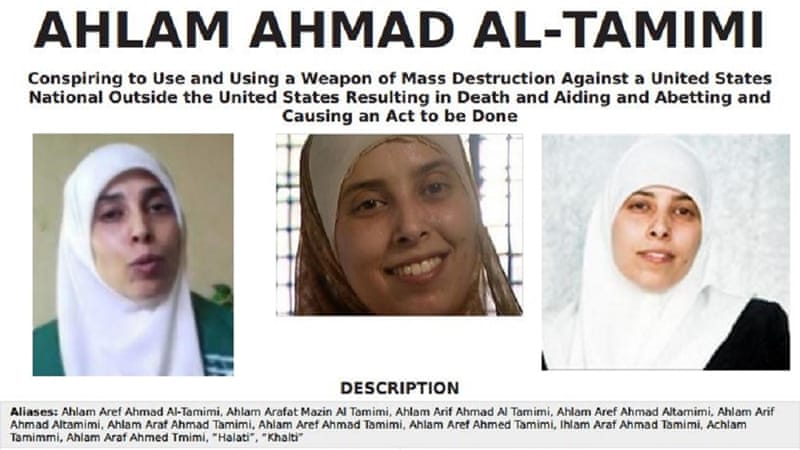 The Trump administration is considering withholding aid to one of its closest Arab partners, Jordan, in a bid to secure the extradition of a woman convicted in Israel of a 2001 bombing that killed 15 people, including two US citizens.

What you need to know

Ahlam Aref Ahmad al-Tamimi is on the FBI’s list of “most wanted terrorists” for her role in a suicide bombing at a crowded Jerusalem pizzeria. It was one of the deadliest attacks during the second Palestinian Intifada.

Al-Tamimi, a Hamas activist, was arrested by Israel weeks after the bombing and sentenced to 16 life terms for choosing the target and guiding the bombers there.

She has lived freely in Jordan since Israel released her in a 2011 prisoner swap with Hamas. Jordanian authorities have rebuffed US requests to turn her over, despite an extradition treaty.

Why is this happening now?

The State Department said billions of dollars of foreign assistance to Jordan could be used as leverage to get Jordanian authorities to extradite al-Tamimi.

The threat came in written answers submitted by the administration’s nominee to be the next US ambassador to Jordan, Henry Wooster, to the Senate Foreign Relations Committee in response to questions posed by Senator Ted Cruz.

Asked specifically if aid to Jordan would be part of that leverage in the Tamimi case, Wooster replied: “If confirmed, I would explore all options to bring Ahlam Aref Ahmad Al-Tamimi to justice, secure her extradition, and address the broader issues associated with the extradition treaty.”

The extradition issue is likely to be raised this week when Jordan’s King Abdullah II speaks to several Congressional committees to voice his opposition to Israel’s plans to annex portions of the West Bank.

The reference to aid in Wooster’s response was unusual. Previously, the Trump administration, and the Obama administration before it, had taken a low-key approach to al-Tamimi, bringing it up in private conversations with Jordanian officials but shying away from a public fight with one of the rare Arab countries that recognize Israel that has been a dependable source of intelligence information about the region, including neighbouring Syria.

The US has long been a significant provider of aid to Jordan. In early 2018, the Trump administration signed a five-year, $6.4bn, aid agreement with Jordan that increased the annual amount of aid by $275m to $1.3bn.

Next-gen Honda Civic revealed in US

With Cuomo under fire, No. 2 Kathy Hochul treads carefully

Next Time You’re in The Bahamas, Leave Your Resort and Shop Local