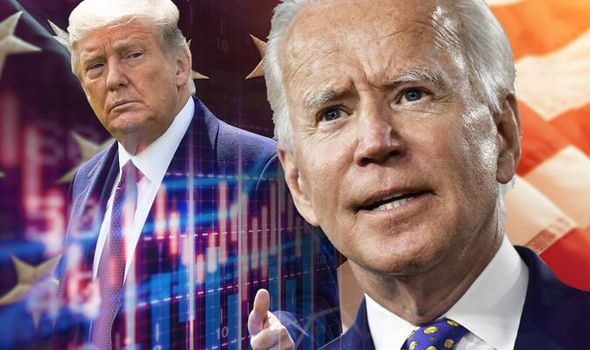 The monthly Democracy Institute Sunday Express poll for the Presidential election shows that Mr Trump is still on course for victory with 46 percent of the popular support compared to his Democrat rival Joe Biden’s 45 percent.

However, his overall lead has dropped by two points since the last poll in September.

The poll was completed after the news broke that President Trump and his wife Melania have been infected by Covid-19.

Almost two thirds said they felt sympathy and concern for the President while 38 percent said him getting the disease was “karma” in an indication of the current divisive nature of US politics.

This gives a projected Electoral College split of 320 to Trump and 218 to Biden.

While other polls have Biden ahead, the Democracy Institute, which correctly predicted Brexit and Trump’s win in 2016, only considers people who identify as “likely voters” rather than all registered voters and also asks about the so called shy vote. 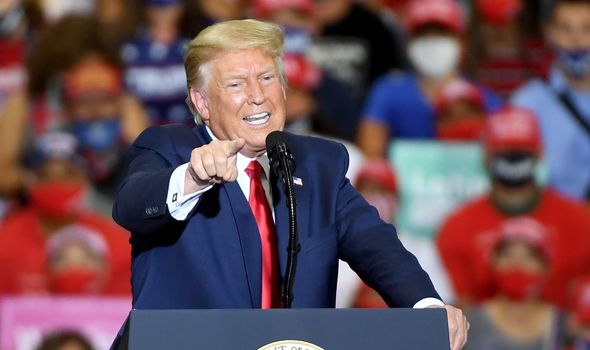 This shows that 77 percent of Trump supporters would not admit it to friends or family members.

Other controversies appear to have had little impact on the election with around 8 in 10 voters saying that the nomination of Amy Coney Barrett to the Supreme Court has changed their position, although Trump got more favourable support 12 percent, than unfavourable 9 percent.

After a first bad tempered debate in the election, 32 percent said Trump won and 18 percent Biden but half thought it was a draw and more than 7 in 10 said it made no difference to how they would vote.

Law and order remains the top issue in the election after riots linked to the black lives matter protests with 32 percent identifying it as their number one concern.

However, the economy is closing the gap with 30 percent putting it top as the effects of coronavirus continue to bite.

Trump outscores Biden on the economy with 70 percent thinking that the economy is bouncing back and 60 percent to 40 percent trusting the President over his rival on the issue. 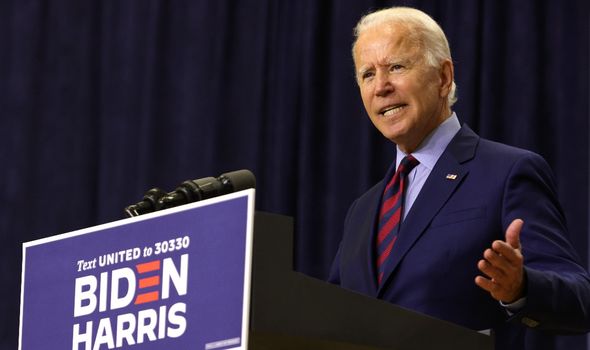 Meanwhile, the poll reveals that former Mr Biden has a “reality problem” with twice as many people giving credit to reality TV star Kim Kardasian for prison reform than the former Vice President.

Democracy Institute director Patrick Basham said: “When a reality TV star beats you in a poll on an important policy question, you know your campaign has a problem.

“We find twice as many voters give Kim Kardashian credit for advancing the cause of criminal justice reform – an especially important issue among Black voters – than rate Biden’s contribution.

“Trump and Biden’s respective standings on this specific issue epitomise Biden’s overarching Achilles’ Heel in this election: comparatively low support and enthusiasm for his candidacy among Black voters. To beat Trump, Biden needs nine in 10 Black votes, and lots of Black voters to cast ballots. Currently, he’s positioned to win only eight in ten, with two out of ten Black voters ready to support Trump, and overall Black turnout looking to be flat, at best.” 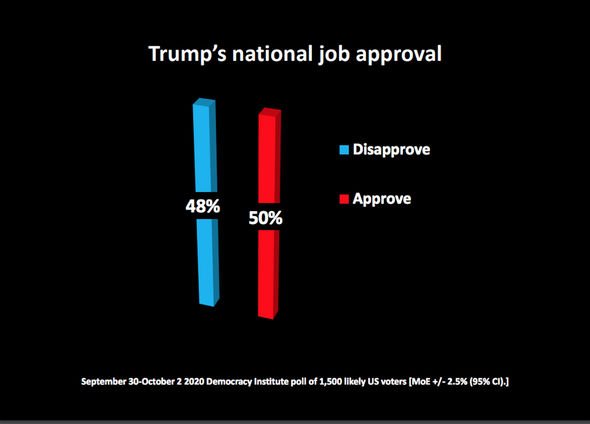 Q. “Are you strongly or very enthusiastic about your choice of candidate?” 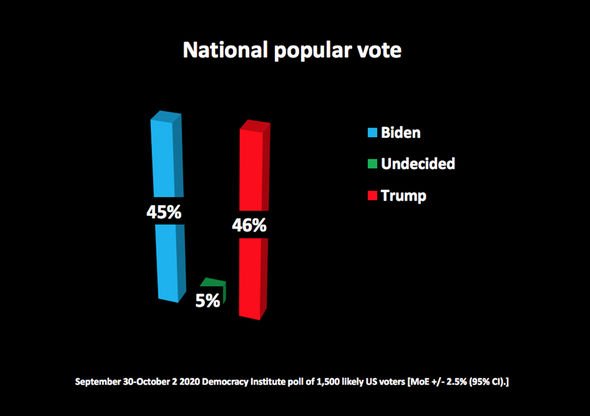 Q. “Is your vote for Trump/Biden a positive vote for your candidate or a negative vote against his opponent?”

Q “Could your vote change before Election Day?”

Q “Does a relative, friend, or coworker plan to vote for Trump?”

Q “Will President Trump be reelected?”

Q “Which candidate will win the second presidential debate?”

Questions to All Voters

Q “Are you comfortable with your relatives, friends, and coworkers knowing how you vote?” 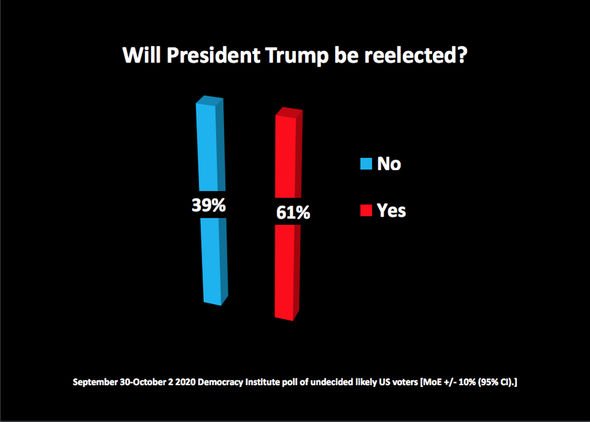 Q “Does President Trump’s nomination of Judge Amy Coney Barrett to fill the vacant seat on the Supreme Court make you more or less likely to vote for him?”

Q “When you learned earlier today of Donald Trump’s positive COVID-19 test, which of the following best describes your reaction to this news?”

Q “Does Donald Trump’s positive COVID-19 test make you more or less likely to vote for him?”

Q “Which issue is most important to you?”

Q “Is the economy rebounding from the COVID-19 pandemic-induced shutdown?”

Q “Which candidate do you trust to do the best job handling the economy?”

Q “Do you approve/disapprove of President Trump’s handling of the COVID-19 pandemic?”

Q “Will Trump or Biden do a better job of standing up to China?”

Q “Do you want your local school to re-open soon?”

Q “Which phrase better fits your own thinking about race in America?” 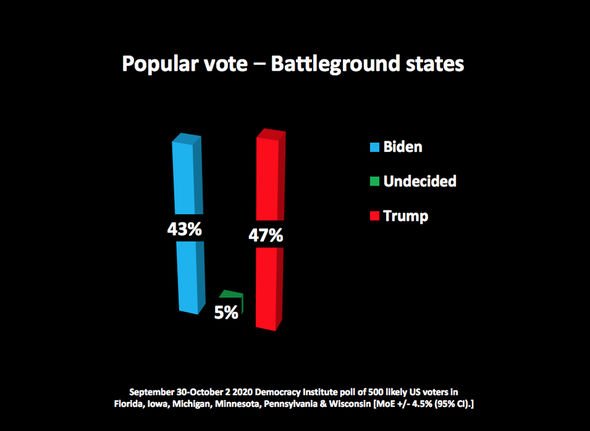 Q “Which one of these people has had the most positive impact on criminal justice policy, especially reforms disproportionately affecting African Americans?”

Q “Do the violent protests across the country make you more or less likely to vote for Trump?”

Q “Has President Trump’s approach to the ongoing protests and riots been too tough, just right under the circumstances, or not tough enough?”

Q “Do you approve/disapprove of President Trump’s handling of the protests and riots?”

Q “Has Joe Biden been sufficiently critical of the violent rioting?”

Q “Should government prioritise law & order on city streets or prioritise improving relations between Black Americans and the police?”

Q “Do you support de-funding your local police department?”

Q “Do you think Joe Biden is experiencing some form of cognitive decline, such as the early stages of dementia?”

Q “Does your opinion of Joe Biden’s mental acuity make you more or less likely to vote for him?”

Q “Is Trump/Biden a strong leader?”

Q “Is Trump/Biden a consensus builder?”

Q “Is Donald Trump a populist?”

Q “Is Trump/Biden too old to be president?”

Q “Is Trump/Biden a likeable person?”

The fieldwork for this survey of a randomly selected national telephone (landline and cell) sample of 1,500 likely voters was conducted by the Democracy Institute’s polling unit from September 30th to October 2nd 2020. The survey was conducted via interactive voice response, in which recorded questions were played for randomly-dialled respondents and answers were given via their telephone keypads. To ensure a representative sample, the results were weighted for key demographic and political variables including, but not limited to, party identification, gender, age, education, income, region, voting history, and cell phone-only households.

The poll also surveyed 300 likely voters in Maryland’s 7th Congressional District with a margin of error of +/- 6 percent at a 95 percent confidence interval. The party identification turnout model for this district is: Democrats = 62 percent; Republicans = 25 percent; and Independents = 12 percent.