Biden, who has spent most of his adult life in politics, will face off against President Donald Trump in November. 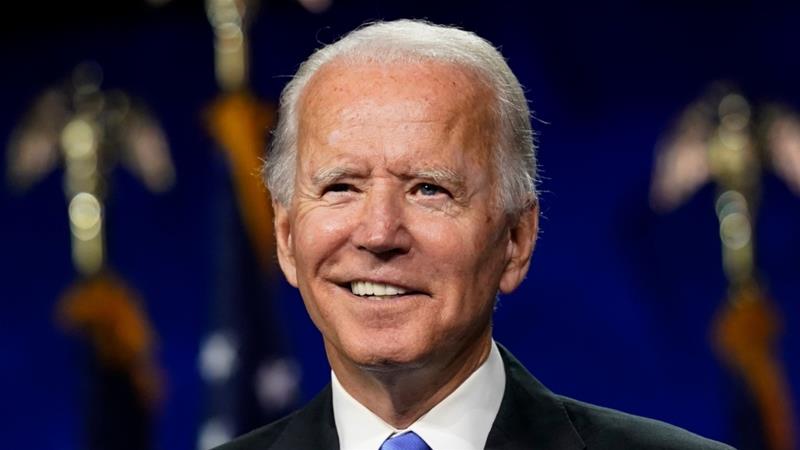 Joseph Robinette Biden Jr is a 77-year-old former vice president nominated by the Democratic Party to take on President Donald Trump in the November 3 presidential election.

The Scranton, Pennsylvania-born Biden has spent most of his adult life in elected office. He won a seat representing the state of Delaware in the US Senate at the age of 29 – one of the youngest ever elected to the chamber. Before that, Biden had worked as a lawyer and served for two years on a county council in Delaware, where his Irish-Catholic family had relocated when he was a child.

The son of a car salesman, Biden’s career in the chamber earned him a reputation as a straight-talking moderate, willing to work with the opposing party to get legislation passed.

However, with a three-decade-long congressional career, and a Democratic Party that has moved farther left in recent years, Biden’s record in the chamber has come under increased scrutiny.

Critics have denounced his drafting of a 1994 crime bill that has been blamed for causing the mass incarceration of minorities and his eulogising of Senate colleague Strom Thurmond, a man who began his political career as a segregationist. He has also faced criticism for his role as the chairman of the Senate Judiciary Committee in the controversial grilling of Anita Hill during the Supreme Court confirmation hearing of Clarence Thomas in 1991. Hill had accused Thomas of sexual harassment.

Biden’s 2020 bid for the presidency is his third. Campaigns in 1988 and 2008 both fizzled. The first ended amid allegations of plagiarism. The second resulted in then-candidate Barack Obama choosing the elder politician as his running mate.

Biden served as vice president during Obama’s two terms, from 2008 to 2016. The pair developed a close relationship from what had initially been a more strategic pairing, with Biden credited for using his working-class roots, folksy flourishes and experience to help shore up support for the country’s first Black president from older white Americans in key northern swing states.

Obama endorsed Biden in April of 2020, saying his former running mate embodied “the spirit of looking out for one another”.

On the campaign trail, the former vice president has been known to espouse “Bidenism” – pithy wisdoms often attributed to family.

“My dad had an expression,” he said at the beginning of his 2020 campaign. “He said, ‘Joey, a job is about a lot more than a pay cheque. It’s about your dignity. It’s about respect.'”

The off-the-cuff style, however, has also left Biden prone to gaffes, including proclaiming during a 2020 radio interview “You ain’t Black” if you support Trump.

Biden has also shown a talent for giving a personal touch to his public persona, speaking about his severe stutter as a child that earned him the nickname “Dash”.

He has also been open about the family tragedies that have marked his time in office.

Biden’s first wife, Neilia Hunter, and infant daughter, Naomi, were killed in a car crash while out Christmas shopping in 1972 – just weeks after Biden had first won election to the Senate.

Biden’s sons Beau, 4, and Hunter, 2, were badly injured in the wreck and Biden was famously sworn into the Senate beside his sons’ hospital beds. He later went on to marry Jill Biden and have another daughter, Ashley.

In 2015, during Biden’s second term as vice president, Beau, who had followed him into politics and served as the Attorney General of Delaware, died from a brain tumour at age 46. Biden briefly swore off running for office after the death.

Meanwhile, Biden’s younger son Hunter’s career as a lawyer and lobbyist, including a five-year term on the board of a Ukrainian gas company, has been the target of unsupported corruption allegations.

An alleged attempt by Trump allies, and the president himself, to dig up dirt on the younger Biden was central to impeachment proceedings against the president beginning in 2019.

Biden’s popularity has grown steadily throughout the election season after initially facing a formidable challenge from progressive Senator Bernie Sanders. The early primary upsets led the Biden campaign to rework some policies ahead of the general election, in an attempt to appeal to the growing progressive base.

The former vice president has also done little to distance himself from his voter-energising former boss, largely embracing the suggestion that his presidency will be an Obama redux.

Along with running mate Kamala Harris, Biden continues to pitch himself as a reassuring and experienced force who can unify the country following four years of Trump. If he wins the election, he would also be the oldest person to assume the presidency in US history, turning 78 by the time he would take office.

In accepting the party’s nomination during the Democratic National Convention in August, Biden envisioned his presidency as “the end of this chapter of American darkness”.

The election, he said, is nothing short of a “battle for the country’s soul”.