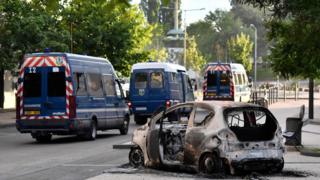 Police reinforcements have been sent to the French city of Dijon following a spate of violence from Chechen groups.

More than 150 people, some hooded and armed, gathered on Monday to avenge the alleged assault of a Chechen teenager by a drug dealer.

It comes after a number of incidents in the city over the weekend.

A prosecutor said several people were hurt, some seriously, on Friday night and one person suffered gunshot wounds on Saturday.

On Sunday, more than 200 people entered the district of Gresilles with violent intent, police said.

The violence began again on Monday, with people setting fire to rubbish bins and a car, AFP news agency reports.

About 37 riot police have already arrived in the city and 110 additional police officers were due to be deployed on Monday.

Bernard Schmeltz, the top state official in the region, said in a statement that the violence “appeared to be part of a settling of scores between members of the Chechen community in France and residents” of Dijon.

In an interview with daily paper Le Bien Public, a man claiming to be Chechen said the incidents were in retaliation following an assault on a 16-year-old by local drug dealers.

“There were about a hundred of us from all over France but also from Belgium and Germany. We never intended to ransack the city of take it out on the people,” he said.

A probe has been opened into attempted murder by a criminal gang, Dijon prosecutor Eric Mathais said.

Coronavirus: 7 virtual journeys to connect with nature from the comfort of your sofa