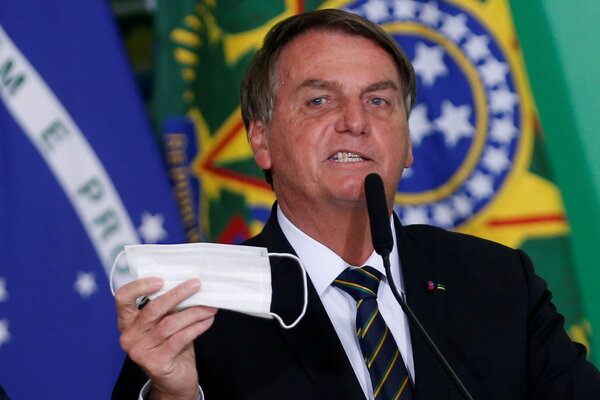 YouTube removed videos from President Jair Bolsonaro of Brazil on Wednesday for spreading misinformation about Covid-19, becoming the latest internet platform to act against a leader whose country has one of the world’s highest death counts, but who has disparaged vaccines and the use of masks and called governors “tyrants” for ordering lockdowns.

YouTube, which played an important role in Mr. Bolsonaro’s rise to power and says it is more widely watched in Brazil than all but one television channel, said in a statement that the president had violated the company’s policies about vaccine misinformation, including the promotion of unproven cures.

“Our policies don’t allow content that claims hydroxychloroquine and/or Ivermectin are effective to treat or prevent Covid-19, claims that there is a guaranteed cure for Covid-19, and claims that masks don’t work to prevent the spread of the virus,” YouTube said in a statement. “This is in line with the guidance of local and global health authorities, and we update our policies as guidance changes.”

Like former President Donald J. Trump, Mr. Bolsonaro has tested the tendency of social media platforms to allow major political figures to make claims that would be likely to get other users censured.

Last year, Facebook removed statements by Mr. Bolsonaro after he promoted hydroxychloroquine as a cure for the virus. Around the same time, Twitter deleted posts from the far-right Brazilian president for pushing false remedies and calling for an end to social distancing.

YouTube said it applies policies consistently across the platform, regardless of the person or political view.

The video-sharing service has faced pressure throughout the pandemic to do more to limit the spread of Covid-related misinformation. In November, it issued a one-week suspension of One America News Network, a right-wing news channel, after removing a video it said violated its Covid misinformation policies.

Criticized at home and abroad for his response to the coronavirus pandemic, Brazil has suffered some of the worst effects of the pandemic. While more than 545,000 people have died from the disease, Mr. Bolsonaro has continued to play down its significance, ridiculing people for wearing masks and declaring he did not plan to get a vaccine.

Mr. Bolsonaro’s YouTube channel is a popular outlet for the president to share his views about the pandemic. In a weekly program in which the president takes questions from viewers, the president has blasted lockdown orders and praised unproven cures.

As of Thursday, the channel had 3.44 million subscribers.

Biden Fractures Foot Playing With His Dog, Putting Him in a Boot

Why Kamala Harris may prove an elusive target for Trump

Steven Joyce: Health reforms – what’s in it for patients?