Hopewell Chin’ono has been using his Twitter account to encourage Zimbabweans to speak out and act against corruption. 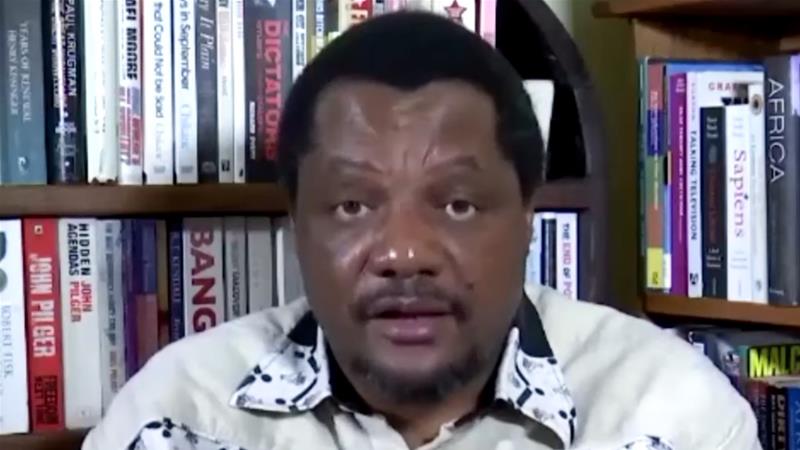 Zimbabwean police have arrested an opposition official and a journalist, accusing them of inciting violence ahead of street demonstrations planned for next week by activists who charge government corruption has exacerbated economic hardship.

The journalist, Hopewell Chin’ono, has a huge following on Twitter, where he regularly posts about alleged government corruption. He has also been using his account to encourage Zimbabweans to speak out and act against corruption.

“They are breaking into my home. Alert the world!” Chin’ono tweeted as police raided his home on Monday. His lawyer Beatrice Mtetwa said he was detained at a police station in the capital, Harare, but was being denied access to lawyers.

The arrest of Chin’ono, a Harvard University Nieman Fellow, drew sharp criticism in Zimbabwe and abroad.

“Political intimidation of the press has no place in democracies,” tweeted the US embassy in Harare, which in the past has been accused by the ruling party of “sponsoring” Chin’ono.

The Dutch embassy described his arrest as “part of a worrying trend against free speech in Zimbabwe”.

The organiser of the planned July 31 protest, opposition politician Jacob Ngarivhume, is also in police custody, said Zimbabwe Lawyers for Human Rights, which is providing lawyers for him.

Police spokesman Paul Nyathi said Chin’ono and Ngarivhume have been charged with “incitement to participate in public violence” and would appear in court “soon”.

Journalists, lawyers, doctors and nurses are among hundreds of people who have been arrested in recent months in Zimbabwe for protesting, striking for better pay or, in some cases, simply doing their work as tensions rise in the troubled southern African country.

A deteriorating economy and reports of widespread corruption linked to government contracts for the purchase of COVID-19 personal protective gear and drugs amid poor service delivery have further stoked public anger.

In June, Chin’ono said he feared for his life after ruling ZANU-PF party spokesman Patrick Chinamasa accused the journalist of seeking to embarrass President Emmerson Mnangagwa by linking the president’s family to alleged corrupt COVID-19-related contracts.

Deprose Muchena, a regional director with Amnesty International, said the arrests are “designed to intimidate and send a chilling message to journalists, whistle-blowers and activists who draw attention to matters of public interest in Zimbabwe.”

“He is being victimized for exposing corruption in government,” said the Zimbabwe Union of Journalists Secretary-General, Foster Dongozi, in a statement.